Explore our network of historic locations and cultural organizations serving our community, and plan a visit!

Contact for more information and to setup a guided tour geared toward any age group. Archive research is free to members and availably by appointment only. 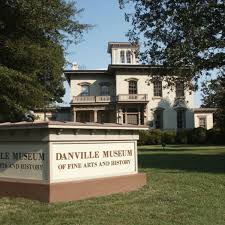 The Danville Museum of Fine Arts and History is located in the Sutherlin Mansion on Millionaires’ Row in Danville, Virginia. Built in 1859 for a leading citizen, Major William T. Sutherlin, the house has become well known as the temporary residence, April 3 – 10, 1865, of Confederate President Jefferson Davis. In this house, Davis authored his last official proclamation as president of the Confederacy. The government remained in Danville until receiving the news of Lee’s surrender at Appomattox on April 10. Largely because of events documented in this house during the Confederacy’s final week, Danville has become known as the “Last Capital of the Confederacy.”

At the time of its construction, the Sutherlins’ home was considered the grandest in Danville. It was situated on four acres of land with several outbuildings: a kitchen, servants’ quarters, a carriage house, greenhouse and stable. By 1912 the acreage had been reduced to approximately one and the outbuildings had been removed. The house was used as the Danville Public Library from 1928 – 1972. The library added wings to the main building in 1934 and 1950. The site has been designated as a Virginia Historic Landmark and is listed on the National Register of Historic Places.

The Danville Museum of Fine Arts and History offers a wide variety of exhibitions, classes, workshops, camps, and educational programs. The Movement which tells the story of the Danville Civil Rights Movement is apart of the permanent collection, donated by the late historian Emma C. Edmunds. Once the segregated Danville Public Library, a young man by the name of Chalmers Mebane along with a young Robert Williams staged a sit in at the library resulting in the integration of the library. These stories and more are highlighted in the exhibit The Movement. The museum is a partner of the Virginia Museum of Fine Arts in Richmond and is a designated site of the Virginia Civil War Trails and Time Travelers programs.

The Danville Public Library empowers and engages our community through access to free resources and services that enable creative thinking and lifelong learning.

In addition, the library houses Danville newspaper archives and resources for genealogical research.

The Danville Public Library empowers and engages our community through access to free resources and services that enable creative thinking and lifelong learning.

In addition, the library houses Danville newspaper archives and resources for genealogical research.

The Langhorne House is the birthplace of Nancy Langhorne, Viscountess Astor, the first woman seated in the British House of Commons. Her sister Irene married the artist Charles Dana Gibson who immortalized his wife as the “Gibson Girl,” the international fashion ideal of the turn of the 20th century. Their father, Chiswell Langhorne, worked in the tobacco industry while in Danville and is credited with developing the tobacco auctioneer’s chant at Danville’s famous loose-leaf tobacco auctions. A historical marker is located at the corner of Broad and Main Streets.

The Langhorne House museum is open Saturdays 2:00-5:00 pm, or by appointment.

Owned and operated by the Caswell County Historical Association (CCHA), the Richmond-Miles History Museum is located in the Graves-Florance-Gatewood House in Yanceyville, North Carolina.

The museum is named for the paternal grandmothers of its benefactors, Thomas Richmond McPherson, Jr., and Kathy Sue Simmons McPherson. Tom and Kathy’s Richmond and Miles ancestors were in Caswell County before the Revolutionary War. Tom’s Richmond ancestors lived in the old Richmond District of the county, the Leasburg/Hightowers area. Kathy’s grandmother, Minnie Ethel Miles Simmons (1900-1996), was an active member of the Cherry Grove community her whole life, which spanned more than ninety years. She was a lover of history, a teacher, and the cafeteria manager in Caswell County Schools. Tom and Kathy’s act of generosity greatly extends the ability of the CCHA to serve those interested in the history of Caswell County. That act will never be forgotten.

The building served as a residence, a school, and possibly a small hotel. That it was constructed in parts over time is attested to by the many “ghostmarks” throughout the structure, which show the various stages of construction. The age and historical importance of the house made its use as a museum almost inevitable.

The museum is open 1-4 pm Wednesday thru Friday (and other hours by appointment).

Virginia Humanities acknowledges the Monacan Nation, the original people of the land and waters of our home in Charlottesville, Virginia.

We invite you to learn more about Indians in Virginia in our Encyclopedia Virginia.